Union Station should be a top infrastructure priority of the City of Chicago. It can become the centerpiece of a highly interconnected transit system, one that serves all parts of the city, the metropolitan region and the whole Midwest. It’s the single most important piece of infrastructure for the city to focus on now. 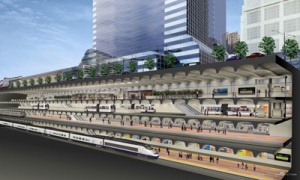 The current master plan to upgrade the station will increase its capacity but it falls far short of the required transformation. Through-routing promises to put Union Station at the center of a reinvigorated system, becoming a nexus of high speed intercity and high frequency regional rail. This will sustain regional transit-oriented growth for years to come.

Earlier, I wrote a 4-part series for New City, All Aboard Renovation: The Remaking of Union Station. Each part may be downloaded,

Part I  Have You Been to Union Station Lately?
Part II  Introducing CrossRail
Part III  Into the Headhouse
Part IV  Getting Started on Union Station

Following this series, I wrote about Union Station for the Chicago Transportation Journal blog, in a post called Use caution with Union Station redevelopment. This promotes the Crossrail Chicago project of the Midwest HSR Assoc, which would bring trains from southern to northern suburbs (and vice-versa) through Union Station with high frequency connections to McCormick Place and to O’Hare.