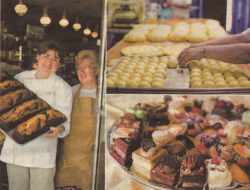 I met Dobra Bielinski in a history colloquium at UIC, and saw she was a person of many interests and talents. Later she opened a bakery, and became proprietress of my now favorite confectionery Delightful Pastries on W Lawrence Ave. We had lunch one day and as she told me about fresh Michigan cherries and fresh cream from some dairy in Indiana, I felt a need to write about it. And help her out with a little publicity if I could. A creative editor at the Chicago Reader came up with the title The Polish Patisserie. Before that I put a little piece in the Trib’s “good eating” section, my one and only recipe article, how to make a Babka.

These articles were derived from a draft I jotted down a year before, after a morning in Delightful’s kitchen, learning how to make a Paczki. I like the part about hand making the round little loaves, so carefully formed, rising and resting til they get firm and “soft as a baby’s bottom,” as she says.

A bright yellow sign on Lawrence Avenue announces Delightful Pastries, on the far northwest side. It’s a cozy little shop full of sweet bread aroma. A bright glass counter holds heaping trays of colorful delectables. Past the counter, a little door opens to a long, narrow kitchen that’s laid out galley-style, with all its implements sitting one after another down its length. It’s well-lit, crowded but not cramped, with white tile walls and high ceilings holding the oven’s warm air.

Dobra Bielinski, Polish-born, Chicago-raised since high school, presides over her bakery with a mother’s care. She lives above with her husband and two children. She hires young women (how many ??) from Poland, Ukraine, even the Czech Republic to work in the bakery. So the place hums like a big family business. She’s built it up for five years now, winning customers with refined flavors and close attention to detail. Every cake, every loaf, every little tart is exquisite.

At the heart of her business is a little pastry of which she is a master: the paczek (pronounced “poonch-ky”). By custom, Paczki Day is the final Thursday before the beginning of Lent. But Dobra’s shop is producing paczki (or “poonch-kys” – plural of paczek) throughout the year. She makes 500 on most weekdays and about 1,000 each day on weekends. Their resemblance to jelly doughnuts is merely superficial, for the little bit of jelly in paczki is not the main show.

The essence of a paczek lay in the dough. Dobra begins making dough the typical way: flour, water and yeast in a big mixing bowl. One big bowl will hold enough for 1,200 paczki. She adds eggs, sugar and fat to make a baker’s sweet dough. She adds more flour until it’s “cracking”, showing that it’s thickening, that the yeast has gathered strength. Then it’s almost ready to work – almost. Good paczek dough requires extra attention.

Dobra needs to “perk it up” a little, as she says. In goes a little lemon-flavored oil, or orange-flavored (or both). And she adds rum to fortify the pastries; to help them resist absorbing oil later on in the fryer. Indeed, she says, Polish pastries are famous for being liquored up. But the one indispensable input is salt. In most baking salt cannot be forgotten, for it controls the yeast that sets the whole dough into motion. But tossing in the right amount is tricky.

Mounds of yellow dough, fresh from mixing, are left to sit for 30 minutes, to “relax”, as Dobra says. While relaxing, the dough gradually becomes dense, malleable, ready for rolling. Its destination waits further down the kitchen. Cooking oil is slowly warming in a vat in the back, while the final glaze sits in sweet delicious whiteness in a big silver bowl. A few laborious steps still lay between the rising dough and these delicious ends. Each is completed carefully by hand.

After relaxing it’s ready to work (or go into the cool retarder to hold for the next day). Two skillful workers can prep 1,000 paczki in an hour or so, doing what they call “dividing and rounding”. First dividing, they take football-size chunks, pressing them out and flattening them on the metal table. These thick disks, protected by flour and wax paper, go into a press, a big piece of metal machinery beside the table. A single hard push on the press handle divides the dough neatly into squarish, hand size pieces, which go back to the table for rounding.

“I’ve seen them square, I’ve seen them all sorts of shapes, but real paczki must be beautifully round,” Dobra insists. It takes a long-practiced hand to make the round balls. It’s a cupping action of the hand, a soft, quick rolling of the dough on the table. Dozens are done. They’re set in rows on metal screens that rest on big square trays. The screens make the characteristic imprint, the criss-cross pattern that always shows on one side of a paczek.

Then the trays go into the proof box – a big metal cabinet full of gentle steam heat. The little balls gradually, quietly rise and swell in the proof box, for about 35 minutes in summer (longer in winter). The trays come out full of beautiful, uncooked paczki, arrayed in rows of little yellow loaves, each the same lovely oval shape.

“Be gentle,” Dobra admonishes, “let them rest for a few minutes.”

For even while the dough is resting it’s gathering strength, the yeast acting within it, eating the sugars, releasing the gasses that rise to make bread. It would blow up but for the salt, the indispensable salt – just the right amount – that controls the action of the yeast. Then gluten, the protein, gradually develops, giving structure and complexity. This appears later as fine bubbles in the dough, which open while cooking, promising lovely dense but airy bread.

There’s a tell-tale sign when they’re ready to be cooked: push one gently with a finger, pressing into the dense dough. If it springs back, it’s ready. Then all attention turns to the big fryer in the back of the kitchen, to a squat metal box filled with heating vegetable oil. Dobra uses either sunflower, cottonseed or the nice neutral soy. Lard is also good, although she usually avoids pork products in courtesy to many customers.

“Frying is the most fun, it’s when you’re almost done with everything,” Dobra says. “There’s a lot of artistry involved,” she quickly adds. “They must be fried well so they come out firm, so that when you bite one it won’t collapse in your mouth like a Krispy Kreme.”

She needs just the right temperature, which she knows by the “30-second rule”, when she can’t hold her hand over the oil for more than 30 seconds. Then it’s good and hot for cooking. And the time in the fryer must be just right as well, so that they come out perfect. She wants them crispy outside, not gooey inside, but a nice, warm, soft texture.

The little yellow loaves, lowered on their wire trays into the dark brown oil, begin bobbing merrily. They seem to enjoy the hot bath. Dobra doesn’t press them under. She lets them float, turning them over and over with a spatula. “The color we’re looking for, it’s a hazelnut brown. And we leave them with a little smile in the middle,” she says,

A big metal toothpick, pressed into the middle of one and coming out clean, shows when they’re done. Then the wicker tray is lifted, catching the floating paczki up out of the oil. They’re glistening, sizzling in heaps on the metal trays. Transformed to a glowing nut-brown color, warm paczki would tempt anyone. But one must be careful!

Dobra cautions, “You might eat a doughnut so warm but not a paczek – they’re still 180 degrees on the inside.” She says this even as she picks them up and tosses them into rows. “Don’t worry,” she adds, “I’ve got asbestos hands.”

While they’re cooling on a table in the back of the kitchen, the final steps of paczek-making are set into place. The white glaze – just sugar in water (with a little citric acid and pectin to help it set) – rests placidly in its silver bowl. It’s stirred, then gently, lovingly applied. It’s a job for two hands and a big spoon, one hand spooning it over the golden domes, the other smearing it softly around. The glaze runs thinly down the pastries’ warm, round sides and drips onto the trays.

Dripping, the paczki eventually get transferred to clean trays and sent down the table to small filling machines. Small vats hold the fresh preserves atop sharp-pointed metal tubes. Pressing the paczki to the points, the machines inject the filling quickly. The pressure must just right, as each filling has its own setting.

Discussing fillings, Dobra’s philosophy of baking begins to come out. She uses the old traditional Polish fillings of plum butter and rose petal jelly, although she’s modernized her offerings for America with apricot and blueberry. But she won’t change her flavor for America. Her fillings are subtle, more tart than sweet.

“Americans want a lot of filling, they want more filling than dough. Poles want just one teaspoon of filling – they like the dough.” Dobra prefers to bake in a more European style, searching for subtle flavors, not covering everything in sugar. But she notices that American baking is changing and, in her opinion, it’s changing for the better. “That’s the good thing about our culture here. We change, we keep on improving,” she says.

Slightly, seductively sweet and crispy, the pastries offer a mouthful of wonderful smooth, full-textured bread. Rose petal jelly, a subtle, soft-scented gelatin, or apricot, a savory sharp preserve, fill the centers. When you’re finished with one you’re simply ready for another. Dobra’s making a few hundred every day and 40,000 in the week before Lent. So let Paczki Day be every day of the year!